Translated from Greek by Kristina Gedgaudaitė

This might sound strange, but the reason behind starting this trilogy stems from music rather than history. I began my research wishing to transfer the biography of Vangelis Papazoglou into comics. Papazoglou is a very important composer of smyrneika music with origins from the city of Smyrna. He changed his surname in order not to be enlisted into the Turkish army and eventually served in the Greek army during the Greco-Turkish War (1919-1922). Moving forward with my research, I realized that gaps and contradictions in the relevant bibliography left many details unclear, and I eventually abandoned this project.

However, while undertaking this research I found out that during World War I, in 1917, approximately two hundred 78-rpm records were made in Görlitz, Germany. Among them, the first (perhaps even world-wide) recording of a bouzouki.

This way, again with music as a starting point, I began my research for the first book in the trilogy The Hostages of Görlitz («Οι όμηροι του Γκαίρλιτς»), a little-known topic in the early twentieth century Greek history.

Then, I basically followed the chronology of historical events. If, in the case of Hostages, the bibliography was rather limited, for the following two books there were literally thousands of resources. I am not a historian, my background is linguistics, but this is how I learned to do bibliographical research even if I had not studied history and historiography.

The main issues that concerned me were twofold. On the one hand, it was historical accuracy in depicting the events, bearing in mind that I did not want to make a documentary of sorts, nor to have an omniscient narrator. Rather, I wanted to have several protagonists and to unfold the historical narrative from their own perspective. On the other hand, I wanted to stay away from the well-known historical narratives and to cast a critical glance, as well as to show incidents and events that did not fall within the national narrative.

My research for each book took many months, because one very important element of making comics, apart from historical accuracy, is visual documentation. As a result, alongside historical research, I undertook similar research in photographic archives, books, and online (to the best of my abilities, as there were also pandemic-related restrictions), so that my images would be accurate depictions of geography, topography, architecture, and clothing of the time.

The trilogy begins with the book Hostages of Görlitz: An Unbelievable True Story of Schism and War. We are in 1916, the Great War, when Greece is going through the period known as the National Schism. On the one side there is King Constantine, who does not want Greece to take part in the war: he is pro-German and his wife, Queen Sofia, is the German Emperor’s sister. On the other side, the Prime Minister of Greece Eleftherios Venizelos believes that Greece should take part in the war on the side of the Allies; he hopes that this way Greece will end up on the winning side and will be able to reap benefits. As a result, Greece splits into two.

When the German-Bulgarian army invades the region of Macedonia in 1916, the Fourth Army Corps based there can neither resist, as this would officially break the truce, nor leave the invaders plunder in the area. So, they propose something that is probably a unique historical occurrence: they suggest that the whole Fourth Corps, seven thousand armed men, should be moved to Germany so as not to take part in the war. The proposal is accepted, and this is how the whole Corps is transferred to Görlitz, where they would stay until the end of the war.

From the perspective of the three protagonists in this book, we follow the soldiers’ transfer to Germany, as well as their lives under this special type of captivity regime. An especially important fact here is that, during the Greek soldiers’ stay, German scientists organized philhellenic recording sessions, during which the soldiers recounted fairytales, played music, and sang. The history of this Greek soldiers’ special type of captivity in Görlitz is not well-known because it was considered betrayal later on. 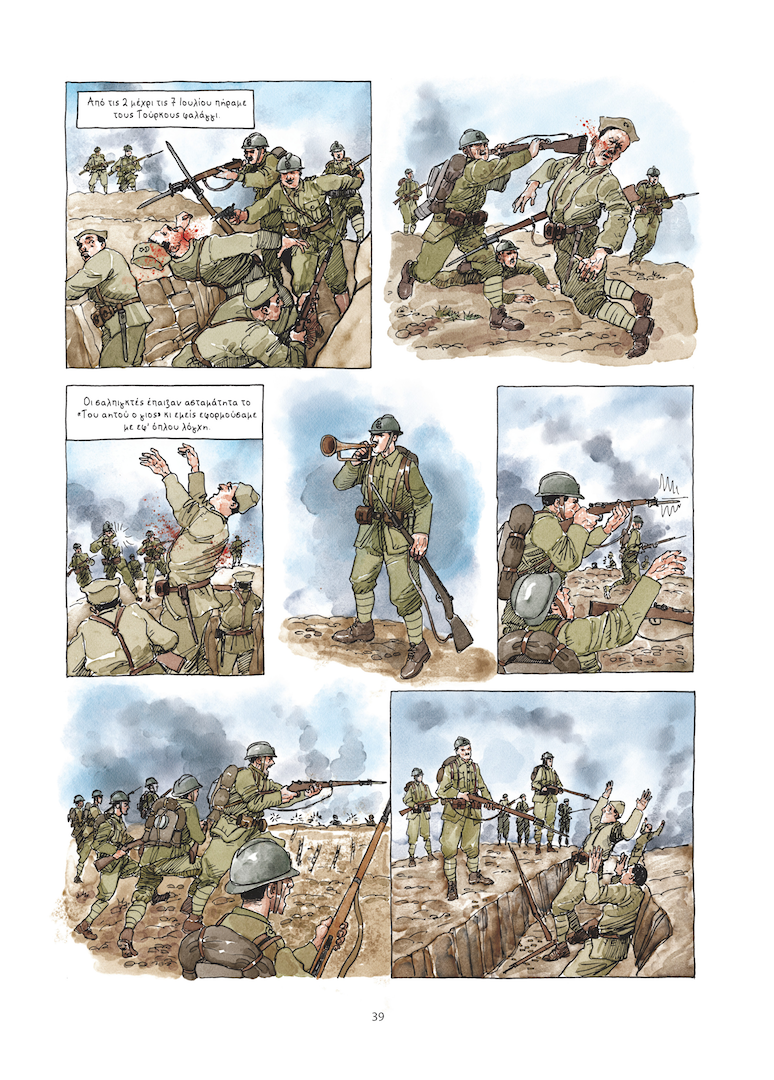 In the second book 1922: The End of a Dream («1922, το τέλος ενός ονείρου»), we follow the events of the Asia Minor Campaign, which started in March 1919 and finished in August 1922 with the defeat and retreat of the Greek army. The main historical and political developments of those three years of war are discussed. While I tried to portray the historical events accurately as they developed during different stages of the war, we are following them through the perspective of the protagonists, the regular soldiers, rather than from an external perspective. We see how the soldiers live through the horrors of war, bloodshed and unending marches, deprivations, hunger, we see their disappointments and hopelessness. The main protagonist of this book is Yorgis Abatzis, a Smyrniot who, after his return from Görlitz, continues his military service in Asia Minor.

In the third book 1923: The Hostile Homeland («1923, εχθρική πατρίδα»), the plot develops after the Asia Minor Disaster, as hundreds of thousands of refugees come into Greece after September 1922. We follow some of the same protagonists that appeared in the previous book in this new environment, in the port of Pireaus. Yorgis Abatzis is looking for his family from Smyrna, just like thousands of other refugees who search for their own relatives. The political situation in Greece is in disarray, and the military takes over the political leadership of the country. The conditions are shocking for both the local Greeks who receive the refugees and the refugees themselves, who have lost everything in Asia Minor and have to build their lives anew in this very difficult environment. 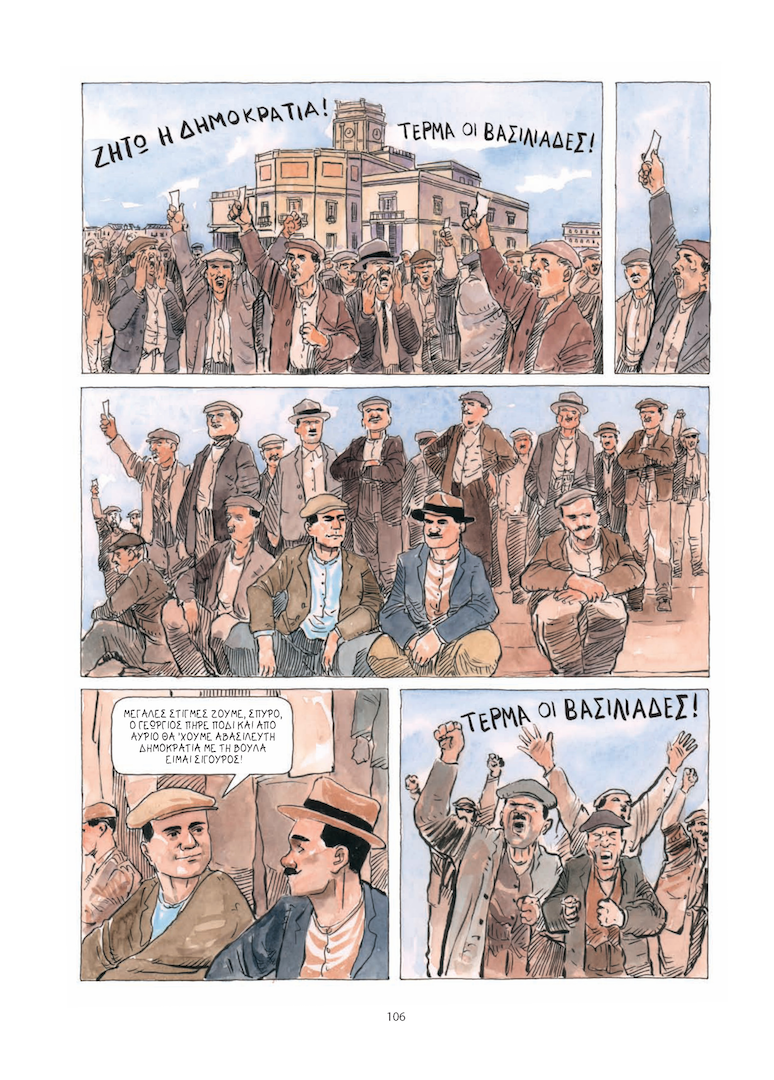 The third book ends with the referendum that took place in Greece in 1924, rejecting the monarchy and proclaiming, for the first time, parliamentary democracy. At the same time, the ending is left open for the story to be continued, as will happen in future.

Thanasis Petrou was born in Thessaloniki in 1971. He studied French philology, social linguistics and comics art. Until now, he has published 17 books, both as a sole author and in collaboration with others.