Writing on Cyprus often feels like tightrope walking: how much to say about what everyone knows and how much to assume is unnecessary to say? In a place where history has been carefully, if crudely, curated (to whatever extent it is possible to do both at once), any framing of events spells immediately a positioning which bespeaks of knowledge, politics, theoretical perspective, and often also “identity” – one of my first attempts to map this field was a rather playful reading of these dynamics through what authors wrote in the margins of their books (Demetriou, 2008). Turning the gaze indulgently to the writing in my latest book, I offer a string of photographs as paratextual material to Refugeehood and the Postconflict Subject.

Writing was, indeed, often driven by visuals, some locked in cameras or my computer, others not captured, and still others conjured up slightly differently to what the screen eventually showed. The selected pictures provide glimpses to some of the concepts that guide the book and in doing so, are intended to underline the syncopated experience of making seemingly disparate issues speak to each other. The formation of “local” and “international” refugee populations is one such instance, and indeed, the research question that sits at the heart of the book (and literally at the centre of the text also). It is that reading across themes that drives the analysis of what kind of conflict refugees land in after fleeing other conflicts, and which allowed me, in re-centring these otherwise “marginal” issues of big conflict questions – the Minor Losses of the subtitle – to rethink the postconflict as a condition. 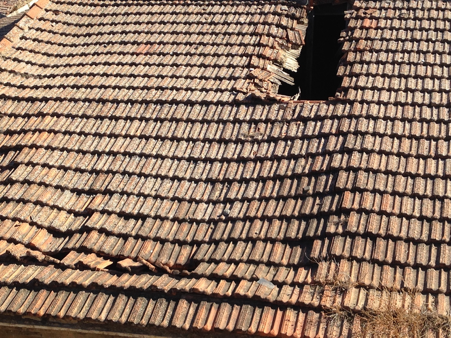 Imbrication refers to the ways in which tiles are laid out on roofs, creating a structure (standing in here for socio-political structures), but also creating spaces where action, resistance, submission, etc, happens, weed-like. In the postconflict these structures endure despite being broken, disordered, ruined. This was one image that guided the central concept of imbrication, running through the book’s structure. The roof is located in the Green Line in Nicosia, inaccessible under normal conditions, and photographed on a rare occasion when I joined a UN walking tour of the Line (chap 5). 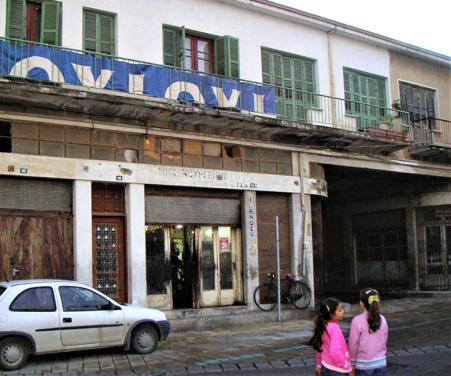 The book is in part a study in the legacy of conflict and what it does to the constitution of the political in the long-term. In understanding that legacy, beyond what I thought I knew from having grown up in it, I often tried to catch flashes of narrative that sprang up unexpectedly (chapter 1) and piece them into what I had assumed we all knew. They may be side comments on bullet marks left on homes (p22) or the re-appropriation of banner signs as screens to provide privacy: here a referendum-era banner urging the Greek-Cypriot rejection of a peace plan in 2004 unexpectedly finding its way to the balcony of an inner-city quarter in north Nicosia populated largely by migrants from Turkey and directly above the palimpsestuous label of the mechanic shop on the ground floor, announcing the displacement of its Greek-speaking owner and continuity of use in another language. 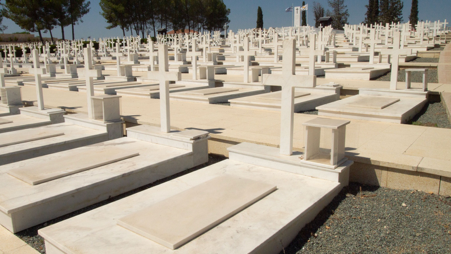 Just as surprisingly, however, I also discovered that there are still basic aspects of the conflict (like counting the victims) that do not lie in some file we never bothered to open. Chapter 2 was initially planned as a short summary of such knowledge that took a life of its own as the question turned from the what we know to the how we know. A large section of Nicosia’s National Cemetery, pictured above, contains empty graves of Greek-Cypriot soldiers whose deaths are waiting to be ascertained. Not quite cenotaphs in the sense of classic nationalism theory, as they remain uncelebrated, they foreground and obscure at once the circumstances of those deaths and the circumstances that frustrated the story of whose victims they and their relatives are and why. The coup, but also the burial of a Greek plane that lay below the cemetery until a few years ago (chapter 5) remain blindspots under a political rhetoric that acts like phobic speech. 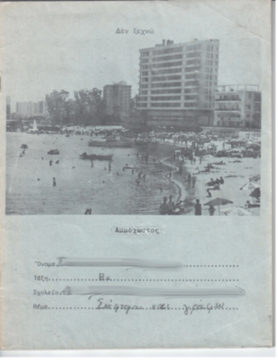 The premise of the book is that the Cyprus conflict is not just a field of knowledge, but a discursive structure that determines the entire field of the political. A key mechanism through which this works is by constituting refugeehood as a generalised condition of the whole population. What I found interesting about the legacy of Cypriot refugeehood was its relationship to marginality – an interest carried over from my previous work in Capricious Borders with the Turkish-speaking minority in Komotini. Already attuned to how multiplicities are employed in the ordering of populations there (and how exoticising differences such as ethnicity, religion, language, and gender, can become implicated in this process), and inspired by new work on Cyprus that had begun to explore hybridities as political devices (Constantinou, 2007), I was interested in folding that question into the operations of “the Cyprus conflict” as an ordering device today. I went back to my own exercise books from school in the 1980s, exemplified here, and juxtaposed to educational approaches to lost lands that are still current (chapter 3). In pronouncing a general refugeehood, those approaches prompt a dissonance with people who have not experienced loss in precisely this way; has anyone, in fact, lost in these exact terms of idealised refugeehood?

Between layers of affect, law and space, I argue that people confront, resist, and revalidate governmental structures. And they thus learn to read the discourse of never forgetting the lost homeland as trite, rhetorical, and real, all at once, performatively moving between submitting to, ignoring, and resisting its perlocutionary force. But if we look at how this works for populations that are often unseen in the conceptualisation of the conflict, the minor losses, then those spaces become even more dense, compacted as they are by how the Cyprus conflict interacts with other discourse and policies, like migration, gender, and citizenship. These crevices, where people find ways to negotiate the discriminations that the Cyprus conflict intersects with (chapters 6, 7, and 8), can be both haunting and homely. Here the walls of the inner city used to register the multiplicities in which “The people of Cyprus” (as this graffiti is entitled), renew and contest depictions of this “people” as the iconic painting by Diamantis (from which the graffiti borrows its name) suggests.

In a context of multi-layered crisis, in which global states of emergency seem to have succeeded one another since 2001, the important lesson for me was the realisation that these crises must be seen in tandem. I return throughout the book to the argument that refugees do not flee war into peace but find conflict where they land too. This is a lesson I continue to work with as I look at the intricacies of reception in other southern European states and their role in projecting northern refugee regimes as liberal (Demetriou, 2019). I continue to work with the notion of imbrication as a way to visualise these multiplicities of crises. Legacies of conflict, contestations of sovereignty, and affective registers all play into the policing of communities and borders that we see today, even as international law and agreements on common practices might purport to render them irrelevant; here the enclave of Melilla, continually fortified and imbricated in its own legacies of conflict on the other side of the Mediterranean. The book speaks to how we may see these connections more clearly in the governing of loss and otherness.

Olga Demetriou is Associate Professor Durham University. She has worked across anthropology and politics on minorities and refugeehood in Greece and Cyprus. She is currently interested on how European refugee regimes produce failures to protect refugees, while she also maintains an interest in gender and security.