Exhibiting a Media Ecology of Crises:

A Visit in the Thessaloniki Cinema Museum

My presentation at the conference “Rethinking Modern Greek Studies in the 21st Century” was part of my PhD dissertation on the establishment and proliferation of key narratives around the Greek crisis beyond the boundaries of representation, and more specifically on how these narratives evoke and perform archival gestures within the realm of cinema. In my research, I examine the connection between two seemingly unrelated sets of discourses. On the one hand, I draw on discourses that are relevant in the newly introduced discipline of film heritage (which, in broad strokes, consists in the study of film as a material entity, where different layers of meaning and agency are inscribed on actual media technologies – be they analog and tangible or digital and necessarily less tactile). On the other hand, I associate these narratives of urgency and obsolescence, loss and hazard, presence and absence, with the foundations of popularized conceptions of the Greek-crisis narrative: spin-offs of the national crisis, the European crisis, the economic crisis, and the crisis of representation and the individual, are profoundly reconfigured against the backdrop of the socio-economic recession in the second decade of the twenty-first century. In turn, this reconfiguration, I argue, is essentially located in archival productions; in other words, within circuits of knowledge production and in sites of contested power.

At the conference, I talked about the main exhibition space of the Thessaloniki cinema museum, which emulates the shape of an unravelling film reel, framing each exhibition room as an actual frame of a film strip, where a sequence of Greek film history is condensed. In the talk, I followed a fragmentary method of analysis accordingly, in order to actively embrace this curatorial logic and test whether this activation of a cinematic technique (the stop-frame, the sequence, the montage) and the allusion to the materiality of film serves less as a gimmick and more as resistance against the linear evolution of grand historical narratives –– what was acutely described as destabilization of the linearity of progress. My goal was to  present the media ecology of this exhibition space as a metaphor for rupture, crystallization, and emergency, which eventually serve as critical tools for a new contextual interpretation, not only of the history of the medium in the country, but also of the mechanisms of making New Greek cultural identities. 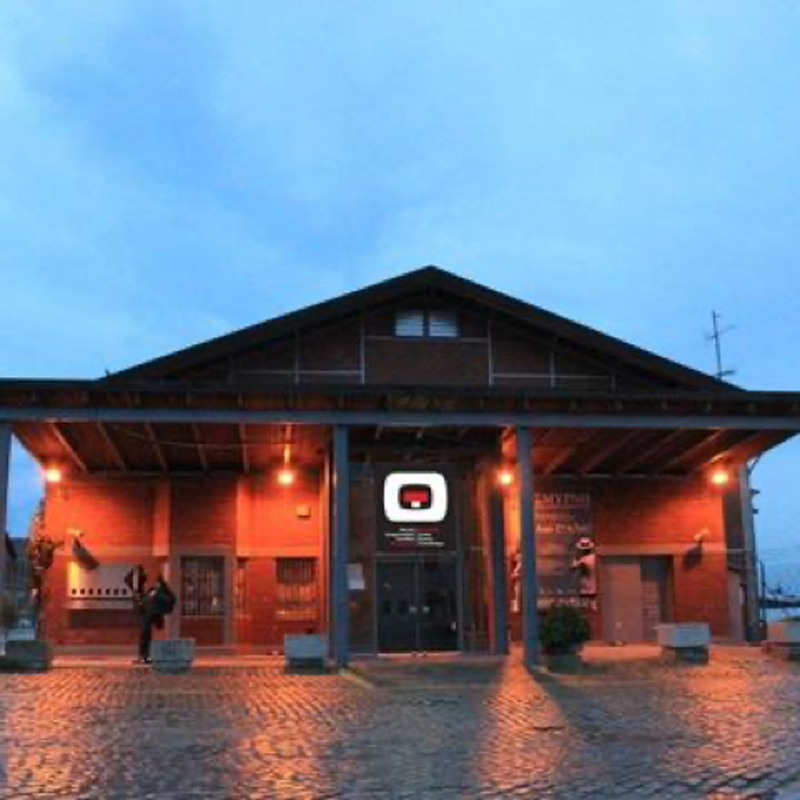 The Thessaloniki Cinema Museum is situated on the waterfront, in the area of the passenger port, in the ground floor of a former Customs Office building. The building that hosts the museum was designed by the Levantine architect Alexandre Vallaury and was built by the Jewish architect Eli Modiano in 1910, upon a commission by the Ottoman state to a newly established French company / an anonymous Ottoman society for the construction and Exploitation of the Thessaloniki Port (Société Anonyme Ottomane de Construction et Exploitation du Port de Salonique). The Museum was founded in a different location in 1995, with the prospect of the appointment of Thessaloniki as European Capital of Culture in 1997, and as a celebration of the centennial of cinema. The local company that undertook the implementation redescribed it as an activation of “industrial heritage”1: “The value of these buildings … lies in their ability to demonstrate the technologies and the modus operandi of an important port during the period of the Ottoman modernization in the end of the 19th and in the beginning of the 20th century, as well as in the age of the reconstruction of the newly found Greek state.” The relocation of the museum to a site of “industrial heritage” was meant to crystallize a critical moment in Greek history – the acknowledgement of its Ottoman past and the transition to the formation of sovereign nation states and their gradual involvement in the configuration of a common “European” (cultural) legacy. So in the  case of the museum, the history of cinema and the experience of a new technical medium became the vehicle for an emergent collective narrative – in a moment in time where “crisis” was not part of the everyday political agenda.

To substantiate this observation, I presented the analysis of the first two exhibition rooms of the museum, where the installations are devoted to what is considered early Greek “national” cinema. The exhibits presented are not artefacts that “prove” the origin and originality of a particular film heritage. The exhibits are products of remediation, displaced and imagined objects that digest different media technologies, but also stories around them. The exhibition space establishes the distinction between analog and digital/or material and immaterial as an interplay of desire and belonging, documentation and imagination, historical truth and individual perception. My analysis of these spaces didn't revolve around the mise-en-scene, the negotiation of the objects, and the framing of installation elements within the boundaries of the official, possibly standardized version of Greek cinema history; rather, it addressed the importance of recognizing different co-existing agencies that manage to convey the complexity of recent historical legacies. By means of an example for my analytical method and approach, I hereby point to the perception instigated by the main entrance to the exhibition: As they enter the permanent exhibition space, today's visitors encounter the scheme of the eight séquences that emphasize the specification of film as a time-based medium. In the cinema museum, montage is no longer an editing technique that is located in the filmic object itself, but rather a navigational tool, a compass with which you orientate in space, in a physical territory. In the main gateway to the exhibition space – in what would be the clear or black leader of the film – we see a photographic collage from pictures from the old cinema theaters of Thessaloniki (which were operating very close to the museum’s location). Exactly as in physical head leader, the projectionist would find all the necessary information he/she would need for the secure performance of the film (including the title, the production studio, the serial number of the copy, the suggested sound level, the aspect ratio), in this area of the museum the viewers are given the context into which they will safely place the experience to come. Consequently, the placement of this edifice on the top layer of a stratum of 20th century ruins necessarily calls the viewers to re-vise the historical past through their lived experience. Lastly, this space reminds us of the most distinguishing, and medium-specific properties of cinema: its phantasmal, spectral ability to reanimate images that no longer refer to physical, material worlds, thus generating different coexisting temporalities. In Bliss Cua Lim's words, “the spectral estranges our predisposed ways of experiencing space, time, and history and hauntingly insinuates that more worlds than one exist in the world we think we know”2. With this in mind, the visitors are encouraged to re-evaluate the certainties of the historical narratives by trespassing an uncertain territory: this happens both literally (by entering a dark corridor whose end is unknown) and metaphorically (by mentally entering an environment that stimulates the effect of film viewing).

The close reading of fragments of an exhibition space, i.e. of the physical interface of an archival collection, did not intend  to provide an inclusive scrutiny of a complex set of archival and museological strategies in Greece, as they develop at times of recurring crises. . It rather attempted to address the multiplicity of manners in which narratives of power, conflict, and degeneration permeate these archives, in a way that could be relevant and illuminating for discussing the Greek crisis. My approach to each fragment as a media ecological system where different technologies converge, recycle, and perform unprecedented agencies, exceeds the intentionality of the exhibition’s curators, who have interestingly stated that they were not interested in the diversity of film formats held in the archive. Yet this can hopefully strengthen my argument that a different sort of political agency resides in what remains minor and off-sight. Therefore, the concluding point of my presentation was that the study of technical media assemblages through cultural analysis can hopefully give us some tools to unpack the complexities of modern Greek culture.

Geli Mademli is a PhD candidate at the Amsterdam School of Cultural Analysis, University of Amsterdam, working on Greek film heritage and the concept of crisis as a modality of media archeology. She has taught at the University of Amsterdam and Amsterdam University College, she collaborates with the Thessaloniki International Film/Documentary Festival and the Syros International Film Festival as a publications coordinator and film programmer respectively. She also works as a freelance journalist and translator, and is a member of the editorial board of the open-access, peer-reviewed academic journal of Greek Film Studies FilmIcon.