Athens Calling: The Commodification of a Landscape in Crisis

From 2008 until the very present, Athens is indeed calling. The city has been in a state of “emergency” that started after teenager Alexis Grigoropoulos’ murder in December 2008. This state has turned into a chronic, ongoing situation, as crisis became the new normality. The expressive outcomes of this period can also be traced in the urban landscape of Athens. Our focus here will be on examples of Street Art and Graffiti that have emerged in the last ten years or so.

Street art is a well-known form of artistic expression and protest across Greece, involving people of different ages and social classes. The practice of “writing” and “painting” on Greek public walls increased dramatically during the period of the crisis, affecting people’s everyday experiences in one way or another.

As Henri Lefebvre (“The right to the city” 1996) argues, wall paintings can be regarded as symptoms of conflicts and harsh times in urban contexts: “The urban space of the street is a place to talk, give over as much to the exchange of words and signs as it is to the exchange of things. A place where speech becomes writing. A place where speech can become ‘savage’ and by escaping rules and institutions, inscribe itself on walls”.

The word “savage” in this quote chimes with the common understanding of graffiti as a form of expression that opposes the sociopolitical status–quo and expresses alternative cultural realities related to oppressed or marginalised social groups. Street art can be understood as an expression of Lefebvre’s demand for the “right to the city”. Since it is open and ephemeral, street art provides alternative and dynamic ways of forming the city – not just for and by those who actively write or paint on walls, but also those who actively engage with it by viewing and interpreting it. The walls become interactive devices of participatory engagement and socio-political dialogue.

[The bottom of a mural in Metaxourgeio by Cacao Rocks stating, “Athens is the new Athens”, photo taken by the authors in July 2018]

Athens has been described as one of the most “stained and saturated cities in the world”. Dense palimpsests of writing, tags and images cover railways, highways, underpasses and entire neighbourhoods. Politicised wall-writings in Athens reach back to the Axis occupation (1941), Greek Civil War (1946-1949) and the years of dictatorship (1967-1974). A first dramatic increase of wall writing and graffiti can be traced back in 1998, when Greece held its first international Graffiti festival in Athens, shortly after winning the bid to host the 2004 Olympics.

A particularly dense presence of street art started to unfold with the events of December 2008, the mass demonstrations and riots provoked by Alexis Grigoropoulos’ murder. Within just a few days the political discontent had claimed the walls of the city through angry political slogans, a memorial to Alexis on the street where he was killed, and street art featuring symbolic references to a new emerging protest culture.

Public opinion towards street art has been and remains ambivalent. This is echoed in the representation of street art in the Greek media and political discourse, both of which are structured along a static binary antagonism pitting “good street art” – such as commissioned murals – against vandalism - tags and political slogans. Street art effectively entered the political discourse in 2015 when a group of artists painted the outside walls of the National Technical University of Athens in a massive, dystopian black and white mural. The graffiti was cleared within the next few days. It seems like the state does not accept graffiti art when it is not part of an institutional framework or officially commissioned. This particular mural, however, partly owing to its dark, unfamiliar aesthetics and the historically charged site that it radically revamped, sparked an unprecedented public debate and preoccupied the Greek political sphere more than any other recent graffiti.

As graffiti targets buildings of historic significance, the city, whose fragile economy depends on tourism, is in a constant battle to control its image. In the past few years, the Municipality of Athens has struggled to protect landmarks and monuments on Panepistimiou Street, which connect the working-class Omonia and the bourgeois Syntagma squares, both of which have persistently been sites of protest.

The most recent anti-graffiti campaign against such acts of “vandalism” has been the mayor’s initiative to clean up specific areas of the historical centre of Athens such as a strip of stone wall that runs alongside the ISAP electric railway line connecting Monastiraki station with Thiseio. Another initiative that caused many reactions was the recent clearance of a graffiti by WD, an Athens-based artist with an international reputation, at the National Technical University of Athens. These decisions are part of general political actions by the authorities aimed at transforming the “dirty” Athens into a place of order and cleanliness. 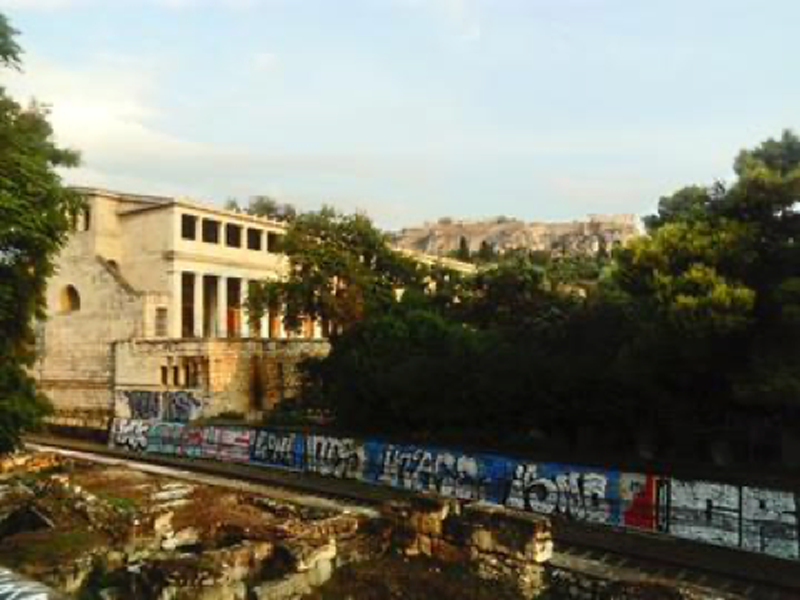 [Graffiti in the train line connecting Monastiraki to Thiseio station, photo taken by the authors in July 2018.]

The urban landscape of Athens emerges as a site for documenting political struggles and making them visible in the landscape. Particularly in moments of political turmoil the streets have the capacity to offer a quick and most of the times immediate reaction.

When in June 2015, then Prime Minister Alexis Tsipras announced the well-known referendum, it took a mere few hours for the first OXI (NO) to appear on the streets of the city as an answer to the question the referendum was posing to the Greek citizens: to either accept the proposed measures of the European Union and the IMF or not. During the following weeks, a plethora of slogans and stencils, almost entirely in favour of the anti-austerity NO campaign appeared.

A more recent example is the way graffiti was used as an immediate response to the murder of queer, HIV and human rights activist and drag queen Zackie Oh!, in September 2019 in the centre of the city.

By walking in Athens, a constant dialogue takes place between passers-by and the walls of the urban landscape, a dialogue that the tourism industry has largely exploited in order to attract new waves of tourists.

In the contemporary tourist industry, Athens has been transformed from a highly symbolic destination defined by its ancient heritage, into a vibrant, hip place offering present-day pleasures and attractions. Among other experiences, such as Greek cuisine or nightlife, a new tourist attraction has been added: graffiti tours. At the same time, another type of tourist has also emerged, a type that not only sets out to explore the city’s graffiti, but would even like to leave her own marks in the landscape. The controversial term ''anarcho-tourist'' is informally used to describe tourists seeking this type of interaction.

What does the foreign gaze on the Athenian walls find appealing? Is the explosion of the graffiti subculture in the Greek capital a sign of the city’s attractive "otherness" in the Western world? Athens is essentially experiencing a Neo-orientalism, a phase where its state of ruination and decadence attracts people wishing to experience this fascinating "other" of Europe. This type of Orientalism repeats old and well-rehearsed stereotypes that have been an integral part of colonial discourses that mark collective European memory.

There is an influx of this wave of dark tourism, through which both the landscape and the people of Athens are getting transformed as objects of trade. A good example is the controversial tourist campaign from the Guardian in 2018, advertised mainly as a tour of “poverty in Athens”. In this tour, which the Guardian eventually cancelled and issued an apology for after receiving severe criticism, crisis conditions were projected as the reason to visit Greece. In the Guardian’s article, “poor” Athens was advertised as a product to potential tourists, who would pay a considerable amount to experience the remains of a city in crisis and have meetings with local and refugee families affected by the crisis.

The touristification of crisis on the streets of Athens, has turned the urban landscape into a commodity – a spectacle and a consumable product – by aestheticizing it; a development that complicates and partly even thwarts the subversive, politically and socially critical force of a large part of Athenian street art.

Efi Giannetopoulou is an MA graduate in Landscape Archaeology and Heritage at the University of Amsterdam. Her current research interests are urban landscape and the ways different political, cultural, social and economic forces alter the image of the scenery around us.

Thomais Dermati is an MA graduate in Museum Studies at the University of Newcastle and currently a MSc student at Piraeus University in Greece for Digital Culture and Smart Cities. Her research interests include digital engagement with heritage and how the current political, cultural and social conditions and economic policies intervene in the urban spaces and transform globalised cities.